I create sculptures and prints that juxtapose my interests in urban landscapes, and scenes of homelessness present in the streets of Manchester. My ambition is to break our passive nature whilst being occupied in the rhythms of the city, and to become more aware of what we choose to ignore whilst travelling through.

My sculptural compositions combine the raw ‘built’ geometric qualities of the polystyrene ‘square’, and the organic carvings I create which borrow from the human form, sometimes mimicking literal organs and body parts. Although reference to the body is often captured in my carvings, it is sometimes emphasised where I add conflicting material ‘skins’, utilising latex and expanding foam. Where these experiments take place notions of the grotesque tend to arise, often creating an unnatural form.

Much like the function of public sculpture, I want the viewer to interact with the forms I make. By being invited into personal boundaries, it is hoped that the viewer would become consciously aware of the similarities between themselves, and the observed forms. Through these interactions it is possible that the viewer could begin to consider my forms as beings, ultimately sympathising with their core frailness. 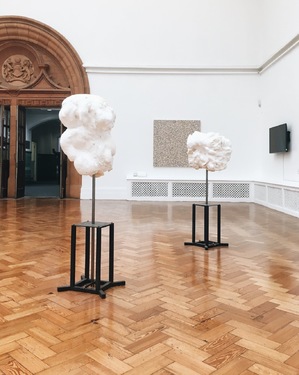